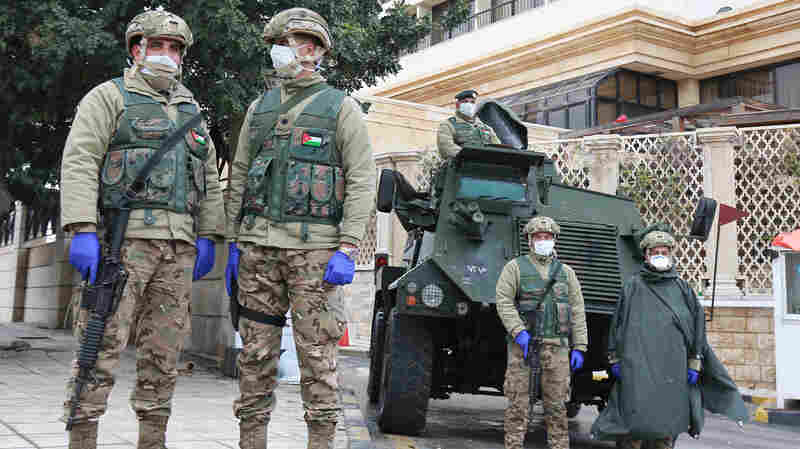 Jordanian soldiers keep watch in the capital Amman as Jordan takes measures to fight the spread of the coronavirus. Khalil Mazraawi/AFP via Getty Images hide caption

March 27, 2020 • The Middle Eastern kingdom says 26 people tested positive for the virus after the large gathering, reportedly including a guest who flew in from Canada. 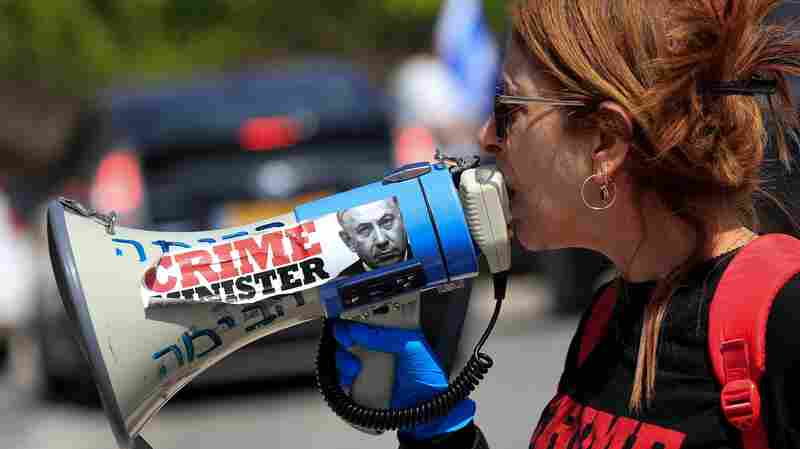 An anti-Netanyahu protester shouts slogans during a demonstration in front of the Knesset in Jerusalem on Wednesday. Emmanuel Dunand/AFP via Getty Images hide caption

In Israel, An Unexpected Political Twist Could Keep Netanyahu In Power

March 26, 2020 • After three inconclusive elections, Netanyahu and his rival Benny Gantz are reportedly close to a deal to rotate as prime minister, with Netanyahu taking the first turn. 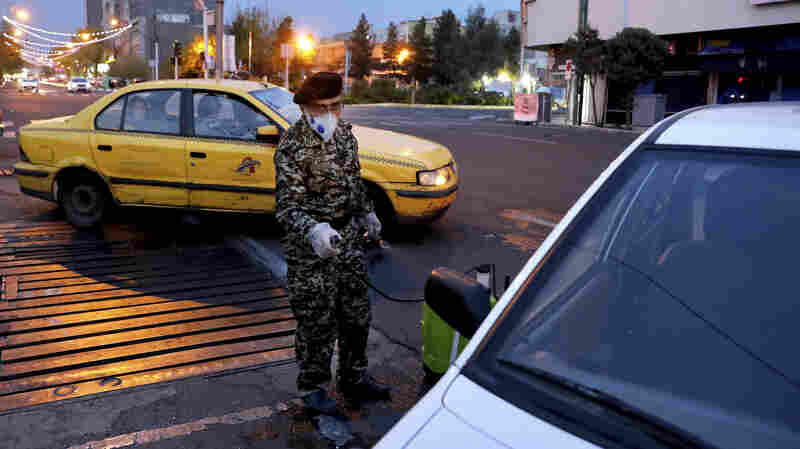 In Tehran a member of the Revolutionary Guard disinfects a car on Wednesday, to help prevent the spread of the coronavirus. Ebrahim Noroozi/AP hide caption

Iran Needs Help To Fight Coronavirus, But Delivering Aid Is A Challenge

March 26, 2020 • Iran is dealing with one of the worst outbreaks of the coronavirus in the world. But getting help into the country is hindered both by a truculent Iranian leadership and strong U.S. sanctions. 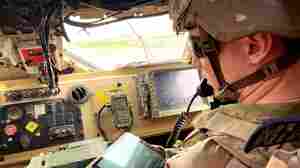 Capt. Alex Quataert points out the areas the soldiers are visiting on the map. Marisa Peñaloza/NPR hide caption

March 26, 2020 • American soldiers are helping secure oil fields in northeast Syria — not only from ISIS extremists, but from Syria and Russia as well. It's a relatively new mission for these troops. 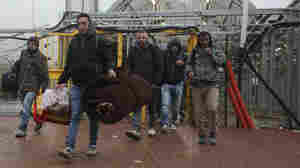 Palestinian laborers enter Israel on March 18 through a checkpoint between the West Bank city of Hebron and Beersheva. They carry blankets and mattresses, in preparation to stay in Israel amid the coronavirus pandemic. Hazem Bader/AFP via Getty Images hide caption

Still Locked in Conflict, Israelis and Palestinians Need Each Other To Fight COVID-19

Still Locked in Conflict, Israelis and Palestinians Need Each Other To Fight COVID-19 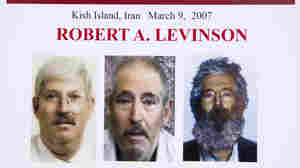 An FBI poster from 2012 shows (from left) former FBI agent Robert Levinson before his capture, in a video released by his kidnappers and as a composite image of what he might look like after five years in captivity. Manuel Balce Ceneta/AP hide caption

U.S. Officials Believe Ex-FBI Agent Who Disappeared In Iran In 2007 Is Dead

March 26, 2020 • Robert Levinson, who went missing while on an unauthorized mission for the CIA, is thought to have died in Iranian custody, his family says. 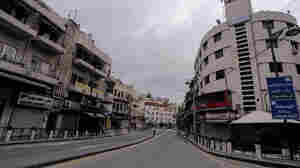 The streets of Jordan's capital of Amman are seen empty after the start of a nationwide curfew on Saturday amid concerns over the coronavirus pandemic. Raad Adayleh/AP hide caption

March 25, 2020 • The Middle Eastern kingdom has forced most people to stay indoors, banned driving and even temporarily shut down grocery stores and pharmacies. 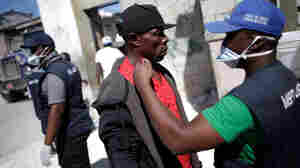 A worker with Haiti's Ministry of Public Health and Population checks the temperature of a Haitian man coming from the Dominican Republic on March 5. Andres Martinez Casares/Reuters hide caption

March 24, 2020 • The co-founder of Partners in Health talks about the challenges facing already challenged health-care systems as coronavirus spreads.

March 21, 2020 • The family of 88-year-old Arie Even said they were saddened not to be able to be with him during his final days. They were asked to stay away in order not to catch the virus. 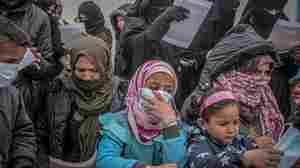 The Idlib Health Directorate and Civil Defense Crews along with local charities carry out disinfection works at a tent city in Idlib, Syria, on March 20. Anadolu Agency/Anadolu Agency via Getty Images hide caption

The Challenges Of Preparing For Coronavirus In Syria

March 20, 2020 • "We're scared of coronavirus and we don't know what God has written for us," says an aid worker. "The precautions being taken here are very little and very weak." 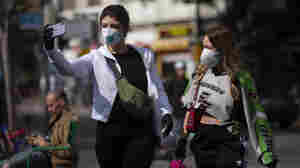 Women take a selfie as they wear face masks in Tel Aviv, Israel, on Sunday. ‏Israel has imposed a number of tough restrictions to slow the spread of the new coronavirus. Now the government is carrying out cellphone surveillance of people who may have come into contact with the virus. Oded Balilty/AP hide caption

Israel Begins Tracking And Texting Those Possibly Exposed To The Coronavirus

March 19, 2020 • The move draws criticism over privacy, as concerns rise about Prime Minister Benjamin Netanyahu's attempts to stay in power.

Israel Begins Tracking And Texting Those Possibly Exposed To The Coronavirus 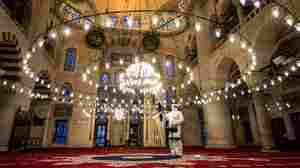 A government worker disinfects the Kılıç Ali Pasa mosque in Istanbul last week. Turkey is just one of a host of countries across the Muslim world where Friday prayers have been banned or curtailed to stem the spread of the coronavirus. Yasin Akgul/AFP via Getty Images hide caption

Coronavirus Fears Derail Friday Prayers For Muslims Across The World

March 19, 2020 • "Islam doesn't permit practices that would put human life in danger," said the head of religious affairs in Turkey, one of a host of Muslim-majority countries to curtail gatherings at mosques. 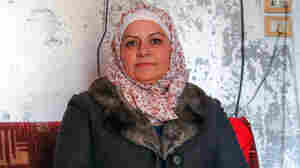 "It is a very, very sad thing when my son says to me, 'Mum, I don't want to die,'" says Etab Hadithi. Ibrahim S. Ali for NPR hide caption

'We Don't Know Where To Hide': The Day-To-Day Struggles For Civilians In Idlib

'We Don't Know Where To Hide': The Day-To-Day Struggles For Civilians In Idlib 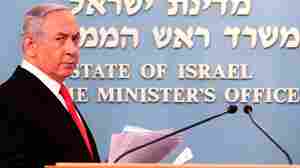 Prime Minister Benjamin Netanyahu approaches the podium to give a speech from his Jerusalem office on Saturday, saying Israel's restaurants and places of entertainment will be closed to stop the spread of the coronavirus. He also encouraged people not to go to their workplaces unless absolutely necessary. Gali Tibbon/AP hide caption

March 15, 2020 • Retired army general Benny Gantz was tapped after a majority of 61 lawmakers in the 120-member Parliament told President Reuven Rivlin they supported Gantz over Netanyahu. 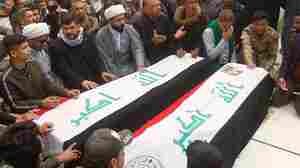 March 14, 2020 • Three U.S.-led coalition members and two Iraqi solders were injured Saturday, continuing a string of tit-for-tat attacks between the U.S. and Iran-backed militia largely playing out on Iraqi soil. 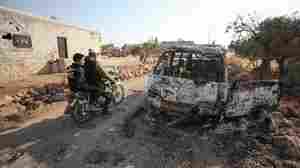 Syrians ride a motorcycle past a burned vehicle near the village of Barisha in the Idlib province of Syria, near where U.S. forces raided the compound of ISIS leader Abu Bakr al-Baghdadi. Local residents tell NPR that noncombatant civilians were killed and injured in the van the night of the U.S. raid. Omar Haj Kadour/AFP via Getty Images hide caption

March 13, 2020 • The military is conducting a credibility assessment of claims of civilian casualties during the U.S. operation against ISIS leader Abu Bakr al-Baghdadi. 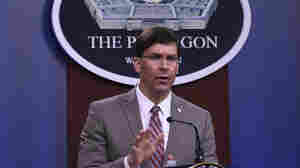 March 12, 2020 • The strikes were "defensive, proportional and in direct response to the threat posed by Iranian-backed Shia militia groups," Pentagon officials said on Thursday. 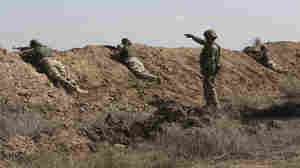 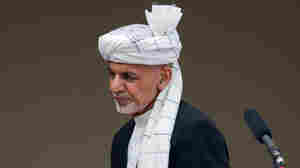 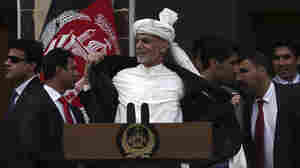 Afghan President Ashraf Ghani opens his coat after explosions were heard during his speech after he was sworn in for a second term. He told supporters he wasn't wearing a bulletproof vest. Rahmat Gul/AP hide caption

March 9, 2020 • As Afghan President Ashraf Ghani had himself sworn in for a second term, rival Chief Executive Abdullah Abdullah took the presidential oath of office in a competing ceremony. Israel has announced a blanket quarantine policy for anyone entering the country; the policy will be in effect for two weeks. Here, empty airline check-in counters are seen at Ben Gurion Airport, near Tel Aviv. Amir Cohen/Reuters hide caption

Coronavirus: Israel Will Require Quarantine For Everyone Entering The Country

March 9, 2020 • Prime Minister Benjamin Netanyahu says the decision was a difficult one. Israel has reported nearly 40 cases of the coronavirus that causes COVID-19. 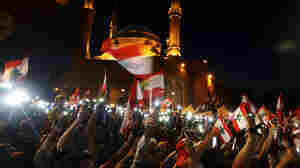 Lebanese anti-government protesters use the light on their mobile phones during a demonstration in downtown Beirut in November. Activists turned to social media platforms to get out their message, streaming protests live on Twitter and highlighting police abuse on Instagram. New podcasts documenting corruption launched with the protest movement. Patrick Baz/AFP via Getty Images hide caption

Lebanon's Government Is Accused Of Swarming WhatsApp To Catch Protesters

Lebanon's Government Is Accused Of Swarming WhatsApp To Catch Protesters