Accessibility links
The Impact of War NPR news and stories about the wars in Iraq and Afghanistan. Interviews with soldiers, world leaders, veterans, and families on the home front. Read and listen to stories and subscribe to RSS feeds. 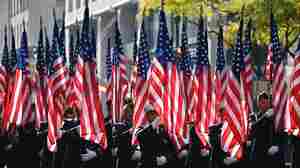 On Veterans Day, here are stories that honor heroes and homecoming

November 11, 2022 • We dug into the NPR Books archives to find stories of combat and coping. Explore novels, memoirs and poems by veterans, and chronicles of war and returning from war — both historical and present day. 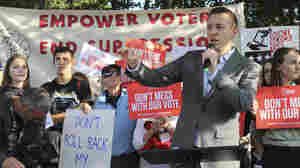 Jason Kander addresses a rally last year. He withdrew from the race for mayor of Kansas City, Mo., on Tuesday, saying he suffered from PTSD related to his military service in Afghanistan. Holly Ramer/AP hide caption

October 2, 2018 • Democrat Jason Kander said the abrupt decision to leave the field of candidates was related to post-traumatic stress disorder linked to his time in Afghanistan as an Army intelligence officer. 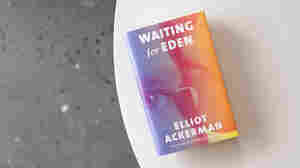 In 'Waiting For Eden,' Grief With No Guarantee Of Closure

September 25, 2018 • Author Elliot Ackerman is a veteran, and his latest novel is about an injured soldier just regaining consciousness. But it's really about something else. "This book really isn't about war," he says.

In 'Waiting For Eden,' Grief With No Guarantee Of Closure 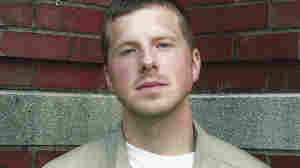 August 13, 2018 • Nico Walker is currently in federal prison for bank robbery. That's given him plenty of time to write his semi-autobiographical novel Cherry, which has received glowing advance reviews. 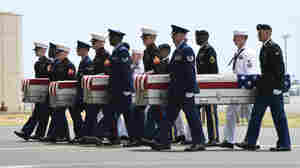 Military members carry transfer cases from a C-17 at a ceremony marking the arrival of the remains believed to be of American service members who fell in the Korean War at Joint Base Pearl Harbor-Hickam in Hawaii, on Wednesday. Susan Walsh/AP hide caption

Possible U.S. Remains Turned Over By North Korea Arrive In Hawaii For Analysis

August 1, 2018 • Vice President Pence was on hand when 55 boxes thought to contain remains of U.S. troops arrive at Joint Base Pearl Harbor-Hickam in Hawaii. They will be sent to a lab for possible identification.

July 29, 2018 • North Korea has given the U.S. 55 small coffins believed to hold the remains of Americans killed in the Korean War. Michel Martin talks to Rick Downes, who's been working to have the dead repatriated.

Karin Bruwelheide handles an amputates limb that dates back to the Civil War. The bones were discovered by scientists at Manassas National Battlefield Park in Virginia. Scientists at the Smithsonian Institution's National Museum of Natural History have been analyzing the bones to learn more about them and who they may have belonged to. Meredith Rizzo/NPR hide caption

June 20, 2018 • Scientists have been analyzing bones first uncovered by a utility crew digging at the Manassas National Battlefield Park in Virginia. The remains provide insights into surgery during the Civil War. 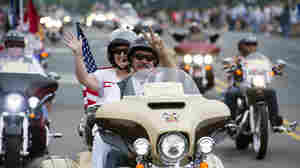 Bikers From Across America Ride To Remember Soldiers 'Unaccounted For'

May 27, 2018 • What started as a group of 2,500 has grown to an estimated 300,000. Motorcyclists from across the country rally in Washington, D.C. to raise awareness every Memorial Day weekend.

May 27, 2018 • NPR's Lulu Garcia-Navarro talks to Rye Barcott, the co-founder and CEO of With Honor. The group supports military veterans running for Congress.

Enemies in Love, a new book by Alexis Clark, tells the story of an unexpected romance. Courtesy of the New Press hide caption

What Happens When Two Enemies Fall In Love?

May 27, 2018 • A love story between a black Army nurse and a German POW during World War II? You couldn't make that story up — and Alexis Clark, author of the upcoming book, Enemies in Love, didn't. 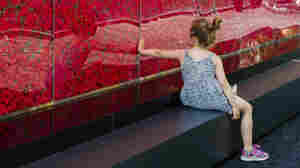 A girl visits The Poppy Memorial, a wall of 645,000 poppy flowers to honor the service members who have died since World War I. The USAA made the memorial that stands on the National Mall. Rodney Choice/AP hide caption

A Wall Of Poppies On The National Mall Honors Fallen Soldiers

May 26, 2018 • In Washington, D.C., a dramatic memorial of bright red flowers pays tribute to men and women who died in uniform. 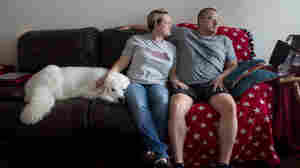 (Top) Britnee Kinard's husband, Hamilton, has a brain injury and PTSD. She got kicked off the program by the Charleston VA in 2014. (Left) Hamilton's daily medication. (Right) His uniform in the closet at their home in Richmond Hill, Ga. Eva Verbeeck for NPR hide caption

May 21, 2018 • An NPR investigation last year revealed that a number of VA centers were ejecting hundreds of caregivers from the program. The VA promised reform, but a year later few have returned to the program. 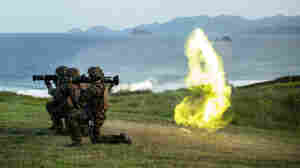 Marines based in Okinawa, Japan, fire an M136 AT-4 rocket launcher as part of a weapons training exercise on the Kaneohe Bay Range Training Facility, in 2014. Lance Cpl. Matthew Bragg/U.S. Marines/DVIDS hide caption

Army 'Leans In' To Protect A Shooter's Brain From Blast Injury

May 17, 2018 • The Army tells NPR of plans to monitor blast exposure across a military career, to enforce limits on firing certain weapons, and to even look into whether special helmets could help stop blast waves.

Army 'Leans In' To Protect A Shooter's Brain From Blast Injury

U.S. Marines fire the Carl Gustav rocket system during live-fire training last October. With each firing, the shooter's brain is exposed to pulses of high pressure air emanating from the explosion that travel faster than the speed of sound. Sgt. Aaron Patterson/3rd Marine Division/DVIDS hide caption

April 30, 2018 • Service members who fire certain weapons can get concussion-like symptoms from the blasts, an Army-commissioned report finds. It urges taking measures to cut the risk of lasting brain damage.

April 22, 2018 • Kathleen Belew's new book explores the impact of the Vietnam War on America's white power movement; Belew says that movement was behind a lot of domestic terror attacks attributed to "lone wolves."

Turkey-backed Free Syrian Army soldiers celebrate around a statue of Kawa, a mythology figure in Kurdish culture as they prepare to destroy it in city center of Afrin, northwestern Syria, early Sunday. Hasan Kirmizitas/AP hide caption

March 18, 2018 • The Turkish military has taken control of Afrin, a city in northwestern Syria. An advocacy group says nearly 200,000 people have been displaced by the fighting.

January 10, 2018 • The Trump administration is moving to enroll all new veterans in Department of Veterans Affairs mental health services. This greatly expands the numbers of veterans enrolled with the VA.

The Tax Bill And The Military

December 11, 2017 • President Trump has promised to increase military spending. Rachel Martin talks to retired Army Col. Peter Mansoor about whether that spending is possible under the Republican tax plan.

The Tax Bill And The Military 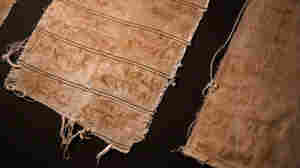 Pieces of cloth that Mansour Omari and other inmates at a notorious Syrian prison used to document the names of the "disappeared" held with them. They made ink out of blood from their bleeding gums and rust from the prison bars. Dylan Collins/Courtesy of the U.S. Holocaust Memorial Museum hide caption

December 7, 2017 • Political prisoner Mansour Omari hid the names of fellow inmates, penned in makeshift ink, in the lining of his shirt. Now free, he tries to keep a promise to ensure the world does not forget them.271

The Number Of Homeless Veterans Rises

December 6, 2017 • HUD has released its latest homeless count and the number of homeless veterans is slightly up from last year. This is despite a years-long effort to bring that number to zero.

The Number Of Homeless Veterans Rises 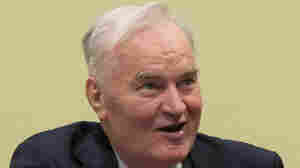 The Sentencing Of A Monster

November 25, 2017 • After a years-long trial, Ratko Mladic was given life in prison for war crimes, genocide and crimes against humanity. NPR's Scott Simon reflects on the legacy of the "Butcher of Bosnia."

The Sentencing Of A Monster

What POW/MIA Means To A New Generation Of Veterans

November 23, 2017 • The POW/MIA movement that began during the Vietnam War changed the way the U.S. sees its responsibility for missing service members. A new generation of veterans sees the flag differently than before.

What POW/MIA Means To A New Generation Of Veterans